Semantic effects in sentence recall: The contribution of immediate vs delayed recall in language assessment

Sentence recall, the immediate repetition of spoken sentences, is used clinically to assess language skills. This seemingly easy task draws on different types of language and memory skills. For instance, phonological (speech sound) skills support the remembering of the word form itself. Semantic skills (knowledge of meaning) aid in remembering the meaning of the sentence. Typically, sentence repetition is tested by having the person repeat the sentence immediately after hearing it (immediate recall). The ability to recall a sentence after a delay (delayed recall) is usually not tested. The goal of this study was to understand the skills involved in immediate and delayed sentence recall.

Across two studies, participants completed immediate and delayed sentence recall. In study 1 involving adult participants, a distracting task was completed prior to delayed recall: either counting backwards from 10 (less demanding) or naming a series of images (more demanding). In study 2 with children, the task was either waiting quietly for 10 s (less demanding) or counting from 1 to 10 (more demanding). Further, sentences were either semantically plausible (The red bus was late so we drove by car) or implausible (The red grass was brave so we spoke to jam) with the idea that more familiar and meaningful sentences would benefit recall. The results were similar across both studies. Immediate sentence recall was better than delayed recall. Plausible sentences were recalled more accurately than implausible sentences. Finally, the more demanding the distracting task, the more participants relied on the semantics of the sentence to support recall (i.e., accuracy declined more steeply for implausible than plausible sentences).

Overall, results suggest that sentence recall draws on both phonological and semantic knowledge, but their contributions may differ. Phonology has a relatively greater role in immediate recall, whereas semantics has a relatively greater role in delayed recall. As well, familiar information supports memory overall. Clinicians who have a good understand about the language and memory skills involved in sentence recall will be in a better position to interpret their assessment findings. Further, there may be a need to incorporate delayed testing into practice. 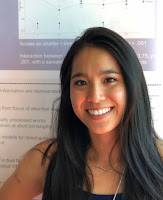 Posted by Project Coordinator at 2:36 PM